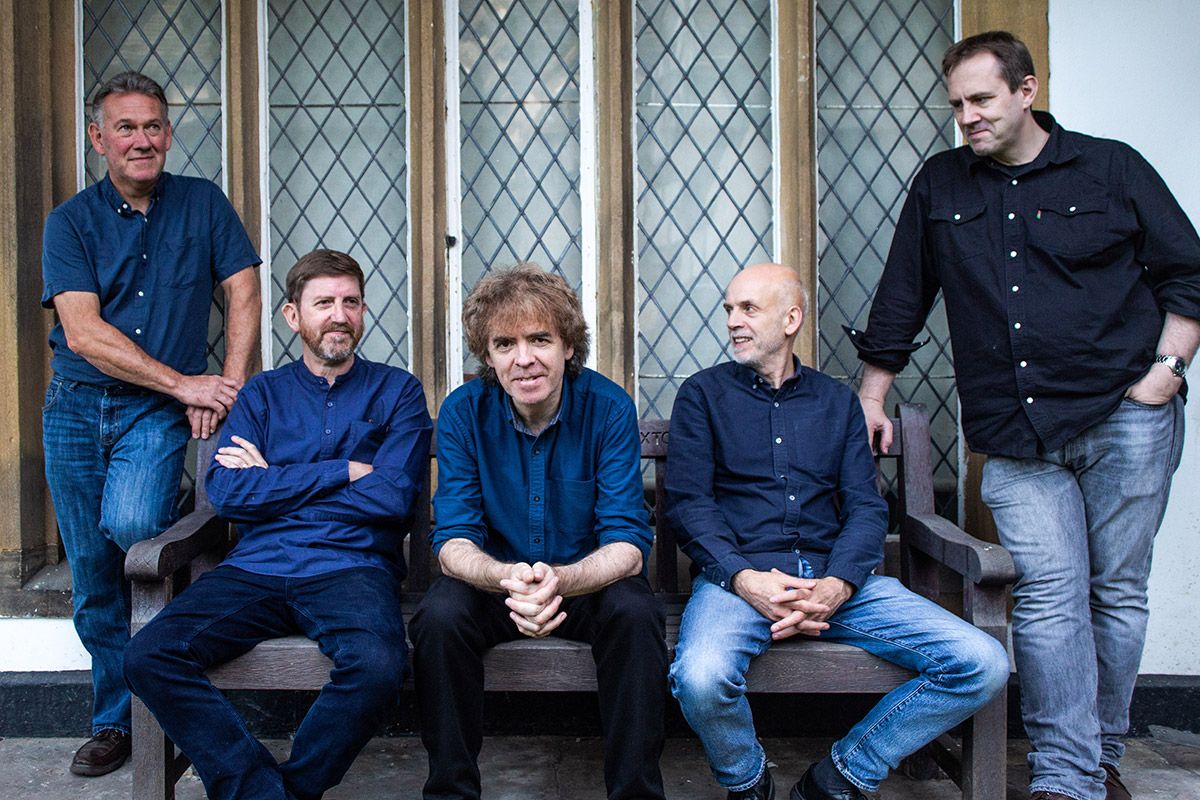 With a 39-year history, IQ are widely regarded as one of the world’s most highly respected progressive rock bands.

The group was formed in 1981 by guitarist Mike Holmes and keyboard player Martin Orford. They recruited bassist Tim Esau that year, followed by vocalist Peter Nicholls and drummer Paul Cook in 1982, when they released their first cassette album ‘Seven Stories Into Eight’. Constant gigging throughout the UK led to them becoming a regular fixture at London’s legendary Marquee Club. Their first vinyl album ‘Tales From The Lush Attic’ was released in 1983, with the classic ‘The Wake’ in 1985 and the live set ‘Living Proof’ in 1986.

Tensions within the band, plus a punishing live schedule, resulted in the departure of Peter Nicholls in 1985, at the end of a UK tour with Wishbone Ash. With new singer Paul Menel, the band secured a lucrative record deal with Phonogram and released studio albums ‘Nomzamo’ in 1987 and ‘Are You Sitting Comfortably?’ in 1989. Both albums were promoted by extensive European tours, with Magnum and Mike And The Mechanics, respectively.

Dissatisfied with the lack of support from Phonogram, Paul Menel and Tim Esau left IQ in 1990. The remaining members recruited Les 'Ledge' Marshall on bass. That year, Peter Nicholls rejoined the band but tragedy struck when Les died suddenly and unexpectedly in the summer.

The 1991 release of the live and rarities album ‘J'ai Pollette d'Arnu’ was a significant event, being the first release on Giant Electric Pea, a new label founded by members and associates of IQ. This year also saw the arrival of John Jowitt as the band’s new bassist. With a stable line-up once more, IQ resumed live work in the UK, Europe and North America while also writing new songs which would form the basis of ‘Ever’ (1993). The sumptuous live box set ‘Forever Live’ was released in 1996, followed in 1997 by the band’s magnum opus, the monumental double concept album ‘Subterranea’. This was supported by a completely new multi-media live presentation, featuring the album performed in full, which earned the band unanimous acclaim.

In 1998, IQ re-recorded their first cassette album as ‘Seven Stories into ’98’ and released the rarities album ‘The Lost Attic’ in 1999 which was followed by concerts in North America and, for the first time, South America. New studio album ‘The Seventh House’, released in 2000,  received much critical acclaim and saw the band tour extensively throughout Europe.  2002 saw the release of ‘Subterranea: The Concert’ DVD. The release of 2004’s ‘Dark Matter’ and the ‘IQ20’ 20th Anniversary Concert DVD recorded two-years earlier before a packed house in Holland, saw IQ back at the very top of the progressive rock tree. ‘Dark Matter’ was voted Album of the Year in countless music magazines around the world.

In 2005, Paul Cook left IQ after 23 years’ service and was replaced by Andy Edwards (ex-Robert Plant Band) who features on the 2-DVD live set ‘Stage’, filmed in the USA and Germany that year. Another line-up change followed in 2007 with the departure of Martin Orford after 26 years. The band enlisted Mark Westworth, formerly with Darwin’s Radio, and, after a short hiatus, work continued on IQ’s ninth studio album, ‘Frequency’, released in 2009. It was a musical tour de force which received universally positive reviews.

Andy Edwards’ decision to leave the band to focus on his teaching career soon after led to the return of original drummer Paul Cook, and in 2010 IQ marked the 25th anniversary of their seminal album ‘The Wake’ with the release of a deluxe four-disc collector’s box set featuring a host of previously unheard studio outtakes, demos and live tracks. The accompanying tour resulted in a live DVD of the album performed in its entirety, filmed in Holland. At the end of the year, Mark Westworth and John Jowitt both announced their departures from the group.

2011 was IQ’s 30th anniversary year. With the arrival of keyboard player Neil Durant and the welcome return of original bassist Tim Esau, the band were able to celebrate this landmark in their illustrious career with four original members in the line-up. IQ performed successful live shows throughout Britain and Europe.

In 2012, IQ celebrated the 15th anniversary of ‘Subterranea’ by re-staging the original show in full, updated with improved technology and production values, taking the show to mainland Europe and America at a special show at the Rite Of Spring Festival (ROSfest) in Pennsylvania.  They also released a full performance CD recorded on the previous year’s 30th anniversary tour.  While in the US they were approached by independent film maker Matthew Miller who wanted to make a full-length feature film based on the story of ‘Subterranea’.  To celebrate the 30th anniversary of their debut album, a deluxe edition of ‘Tales From The Lush Attic’ was released containing a remix of the album, a plethora of writing sessions, rehearsals, demos and unused ideas as well as a concert DVD featuring most of that landmark album.

IQ’s eleventh studio album, ‘The Road Of Bones’, was released in 2014 and once again received universal acclaim gathering numerous ‘album of the year’ awards from progressive rock media. This was followed in 2015 by the double ‘Live On The Road Of Bones’ album recorded at The Met in Bury, a venue that had seen the band perform annual sell-out shows since the ‘Subterranea’ show was debuted there over two nights some 17 years previously. The film based on ‘Subterranea’ was commercially released in 2016 after gaining a couple of prestigious awards at film festivals the year before.  The soundtrack to the film by Mike Holmes was also released which included a specially recorded new IQ song written exclusively for the film.

2017 saw the release of the first IQ BluRay ‘Scrape Across The Sky’. Recorded at a concert on the ‘Road Of Bones’ tour, the disc featured over three hours of bonus features. To celebrate 20 years of the infamous IQ Christmas Parties, the band gave away copies of ‘Tales From A Dark  Christmas’ seasonally-themed CD to everyone attending the 2017 Xmas concerts in London and Holland.

The band spent 2018 writing a recording material for a new album but also found time to celebrate the 25th anniversary of ‘Ever’ at concerts throughout Europe and North America. A deluxe three-disc version of ‘Ever’ was also released featuring remixes, surround sound,  live versions and ‘further listening’ tapes.

The long-awaited new album ‘Resistance’ was released in 2019 with many claiming it was their best album yet, a real accolade for a group that started some 38 years ago.

With major celebrations planned for IQ’s 40th anniversary in 2021, including the release of a comprehensive band biography and several other surprises, IQ retain a unique place as one of the leading progressive rock bands of the past four decades.