In Feb 2005 I was out on a clinic tour Tama drums when I got a call from my girlfriend. She told me her mum had been talking to someone at work and they had told her that the band IQ were looking a drummer.

'Have you heard of this band' She said 'Well, I know there is a prog band called IQ but it won't be them' I said 'It's probably some local covers band looking for a drummer, how would your mum know anybody in the real IQ?' 'She said their drummer Cookie was leaving and they are looking to audition for a new drummer. You should give them a call...' 'Look, when I get home I shall prove to you it's just some local cover band wasting my time!'

On returning home I hastily fired up the internet to prove to my girlfriend that it wasn't the 'actual' IQ. As I found the IQ website I read with amazement that it was in fact the case. So we can thank my girlfriends mum for me now residing in the drum chair of one of the best prog bands in the world! (So many of the important things that have happened to me in my musical career so far have happened in this type of fashion). The next day I called John Jowitt and we had a chat. I modestly told him I was the ideal man for the job and he agreed to send me some songs to learn for an audition. Now I grew up listening to lots of prog and jazz fusion but many of the bands I have played with in the past have not appreciated me bringing in these influences into their music so when I heard IQ wanted a drummer I wanted the gig really bad! (finally, a chance to play in 13/8) So when I turned up for the audition I was pretty nervous.

I met the guys and we played songs I had learnt (which were Leap of Faith, Sacred Sound and middle bit of Harvest of Souls) and the we jammed on The Wake. We had a chat about films. I found out Mike and I are both Powell and Pressburger fans; I thought these were my kind of guys! Eventually John rang me up and said they liked my playing and would I like to come for another audition. I went along to that one about four weeks later. I arrived and we started playing the songs. About half way through one of the songs Mike says 'How you fixed for doing the gig in Bilston in September?' John jumped in 'Has he got the gig then?' 'Well I thought he had' said Mike and then they all joined in 'Welcome to the band, Andy' Thats how I found out I was now a member of IQ

A few weeks later I was driving down to London for a meeting with Zildjian cymbals. I had a call from John. 'How do you fancy doing these gigs in America?' 'I'd love to do them' I said. 'Great, because I've already told the lads that you would do it...' Now, I'd worked out a schedule for learning the huge amount of very complex material that I would need to know to play a full set. But now I was doing these earlier gigs it meant I would have a lot less time to learn the stuff. Also, I'd got my holiday booked so the four weeks I had to learn them would actually be cut down to two weeks. On top of this I was preparing to play at Drumfest, the UK's biggest drum event. In the end I learnt the set sat in the beautiful surroundings of the Dordogne. Now when I listen to something like Widows Peak it reminds me of the idyllic French countyside.

My first gig with IQ was a the Medley in Montreal. This was to be followed by a headlining gig at Nearfest which was also to be filmed. So for me the pressure was on. Now I've played in some pressure situations in the past, I've performed to 50.000 people with Robert Plant and performed drum duets with some of the greatest drummers in the world but I must say that these two gigs were the most frightening things I've ever done in my life! Not only did I have to play some very complex music but I also had to step into the shoes of Paul Cook, who is an exceptional drummer and had created the perfect drum parts for these songs. On top of this there was only time for two days of rehearsals. In rehearsal we had to not only rehearse the songs but also decide what elements we would keep from the existing drum parts and what elements we would change to bring my own personality to the music. This has proved the greatest challenge. The Montreal gig would show if we had got the balance right.

It was with a mix of fear and excitement that I left the dressing room for the stage at the Medley. As I waited at the side of the stage with the lads the video screens fired up. Not having seen an IQ gig before I wasn't really prepared for the theatrical elements of an IQ gig. The video and lights combined to wipe all my fear away and we went out and played a great gig! It was nice to have got that one out of the way. The morning of the Medley gig we had heard of the awful bombings in London. It was wierd to be so far away and hear this news. The following day we left by coach for the Nearfest gig. This meant passing over the Canada/US border. Because of the previous days events we were kept at US customs for what seemed like most of the day. In the end the coach trip took 14 hours and we arrived at Nearfest late and tired. Before we went to bed we checked out the stage; a great big auditorium designed to put on classical concerts. By this time I was feeling a bit rough and so I went to bed. The next day I woke feeling dizzy with headache. I felt like I had a cold coming on. We went down to the venue and soundchecked which went well but I was a little annoyed I didn't feel 100% This was an important gig and it was being filmed to so we all wanted to get it right. Eventually that time arrived and we headed down to the stage. The video started up and I walked on stage and went into the first song, 'Sacred Sound'. As I started to play I realised I had no monitors which meant I could barely hear the rest of the band. I looked around and could see that Mike and Pete were in the same situation. When a gap came I exited the stage and had 'words' with the monitor guy (When I say words, I mean the four letter variety mostly...)

Eventually the monitors were sorted out and we went upstairs to do a signing session. Still shaken up I started to chat with the audience members who, although aware of the there were technical problems, all thought it was a great gig. My third gig with IQ was at the Burg Herzberg festival and this also being filmed for TV (talk about in at the deep end.) Burg Herzberg is a hippie festival and has a variety of acts on. It wasn't your standard prog audience so we were aware we would be playing to an audience where some of them did not know our stuff. But in the end it was a great gig. I had started to relax a bit and really had fun.

With the start of our UK dates (we recently played the first in Bilston) I really feel as though I have settled into the band and I am really excited about what the future holds. Being a member of a band is new thing to me (I have done session for so many years) and it is great to feel part of the IQ family (that being the band, crew and fans) It is incredible what IQ have achieved artistically over the past 24 years but I am equally excited about contributing to the next phase of the IQ story. Watch this space!

Thanks to the guys for picking me and to everyone for giving me such a warm reception.

See you all soon 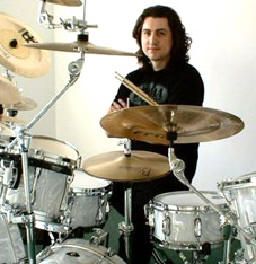